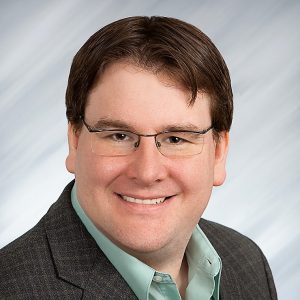 He woke up on the morning of June 3, 2017, with a blood clot in his basal ganglia, which robbed him of the use of his left arm and leg. With a lot of work and physical therapy, Bill relearned how to walk, albeit with a nifty cane. His arm is getting better. Bill is optimistic that one day he’ll get my fingers back.

Professionally, Bill is a corporate trainer and product evangelist, primarily focused on the technology industry. He has worked for some of the world’s largest corporations, including Toshiba and Microsoft. He has done media interviews at major tradeshows for broadcast around the world, and he has appeared on QVC multiple times. I’m always looking for new opportunities to speak, write, teach, and travel.

Bill is a podcaster who drove the creation of podcast based training in US electronics retail. He is also a regular guest on the Caffeinated Comic podcast, a Chicago-based show covering the comic book, geek, and pop culture content and issues. Bill also host the 2-Minute Talk Tips podcast where he helps folks become more effective public speakers in as little as 2 minutes a week.

In February 2018, Bill launched the Strokecast podcast where he explores rehab, recovery, the frontiers of neuroscience, and one-handed banana peeling. He plans to use this platform to share his story and the stories of other stroke survivors, caregivers, medical professionals, and others impacted by stroke.

Personally, he lives in Seattle, WA, with his long-term girlfriend. Bill grew up in Queens, NY, and went to college in Helena, MT. He had a great time and education as part of the Carroll College Talking Saints, the school’s award-winning Speech and Debate team.