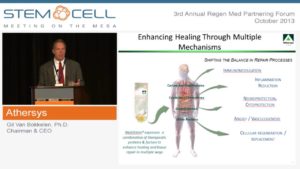 Sharon Thomas was a road construction worker in Oregon, whose life took an unexpected turn at age 45 when she collapsed with a massive stroke that left her unable to walk, talk or even swallow. Her stroke struck one night while she was clearing dishes after dinner at her parents’ house near Roseburg, Oregon.

Her father noted that something was wrong with Sharon and that she may be having a stroke. She felt herself falling–knowing she was going to fall but not why–and was caught by John, her husband.

Sharon was airlifted from a nearby hospital to OHSU in Portland.   John was told to prepare for a long period of rehab for Sharon and that life would never return to normal.

Fortunately, doctors at OHSU told John about a trial for a cell therapy from Athersys, Inc., called MultiStem.  The study was double blind and it was disclosed after the Phase 2 trial ended that Sharon did not receive a placebo.  She did receive MultiStem.

After a period of physical, occupational and speech therapy, Sharon returned to work, which required lifting 30-pound sandbags and driving heavy road construction equipment.   She returned to coaching basketball and because of her continued recovery, Sharon felt confident enough to change jobs recently to work in an all-new field.