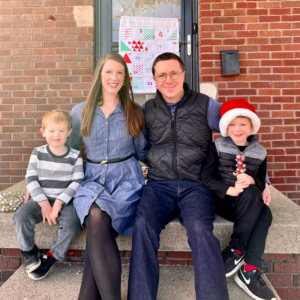 In 2013, Chris Tuley had a stroke at the age of 27. With zero family history of stroke, no risk factors, and no obvious genetic disorders, doctors determined the stroke was caused by a spontaneous vertebral artery dissection. Unfortunately dissections are one of the leading causes of strokes in younger people.

After spending months in therapy to correct the loss of his vestibular function, Chris fully recovered, however he had lingering nerve pain in his face that was getting progressively worse. Chris was diagnosed with central poststroke pain syndrome and received treatment at Vanderbilt’s Pain Management Clinic. After trying over 25 medications, nerve blocks, Botox injections, and eastern medicine therapies with little to no relief, Chris was desperate and despondent. Chris was told his future was likely to be filled with an increasing amount of opiates that only provided temporary pain relief.

Luckily fate stepped in as Chris’ pain management doctor shared his story with a Vanderbilt neurosurgeon who specializes in deep brain stimulation. In 2016 Chris received deep brain and motor cortex stimulators to treat his chronic pain. Since the surgery, Chris has found major pain relief and is no longer on any opiates or any other pain relief medication.

Chris is now an advocate for stroke education, chronic pain management, and the use of deep brain stimulation for pain management (which is still not cleared by the United States’ Food and Drug Administration).